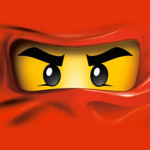 A long time ago, the first captain of Spinjitzu created the world of Ninjago. The captain created the world with the four mystical weapons of Ninjago: The Nunchuks of Lightning, the Shurikens of Ice, the Scythe of Quakes, and the Sword of Fire. The master trusted the world and the four mystical weapons to his two sons, Sensei Wu and Lord Garmadon. His sons promised to protect the secrets of the weapons. However, Lord Garmadon was drawn to the dark side and he became greedy. He wanted the power of the weapons to himself. After an epic battle with his brother, he was banished to the underworld.